Do you have a MtnMeister t-shirt? Get one!

Trip Report: Summit for Someone on Grand Teton

Big City Mountaineers (BCM) transforms the lives of under-served youth through wilderness mentoring expeditions that instill critical life skills. They partner with community-based youth organizations and caring adult volunteers who act as mentors in the field to help young people realize their potential. BCM’s curriculum improves self-esteem, responsibility, decision-making abilities, and communication skills in close to 1,000 youth annually. BCM has a proven track record of improving young peoples’ lives with:
• Increased likeliness to stay in school
• Reduction in violence
• Reduction in drug use

BCM youth from Squashbusters on a trip in the White Mountains of New Hampshire.

Summit for Someone (SFS) is the fundraising arm of Big City Mountaineers, where passionate outdoorists climb their dream peak and fundraise for the organization.

Summit for Someone also includes “custom challenges” where enthusiasts can put together their own project as well as corporate challenges where companies can host a program for it’s employees. REGISTER HERE if you’re interested in participating in an SFS climb. From July 7th-10th, MtnMeister hosted a its annual Summit for Someone podcast episode, where host Ben Schenck climbs a dream peak outside of his comfort zone and records the experience along the way. This year, listeners of the podcast were invited to join in on the experience, and the challenge – not only was the fundraising minimum $4,000, participants would be training for months and climbing with people they have never met before. The team was guided by Jackson Hole Mountain Guides, who not only outfits climbing, skiing, and mountaineering on the Grand, but also Moab, Wind River Range, Beartooth Wilderness, and more. 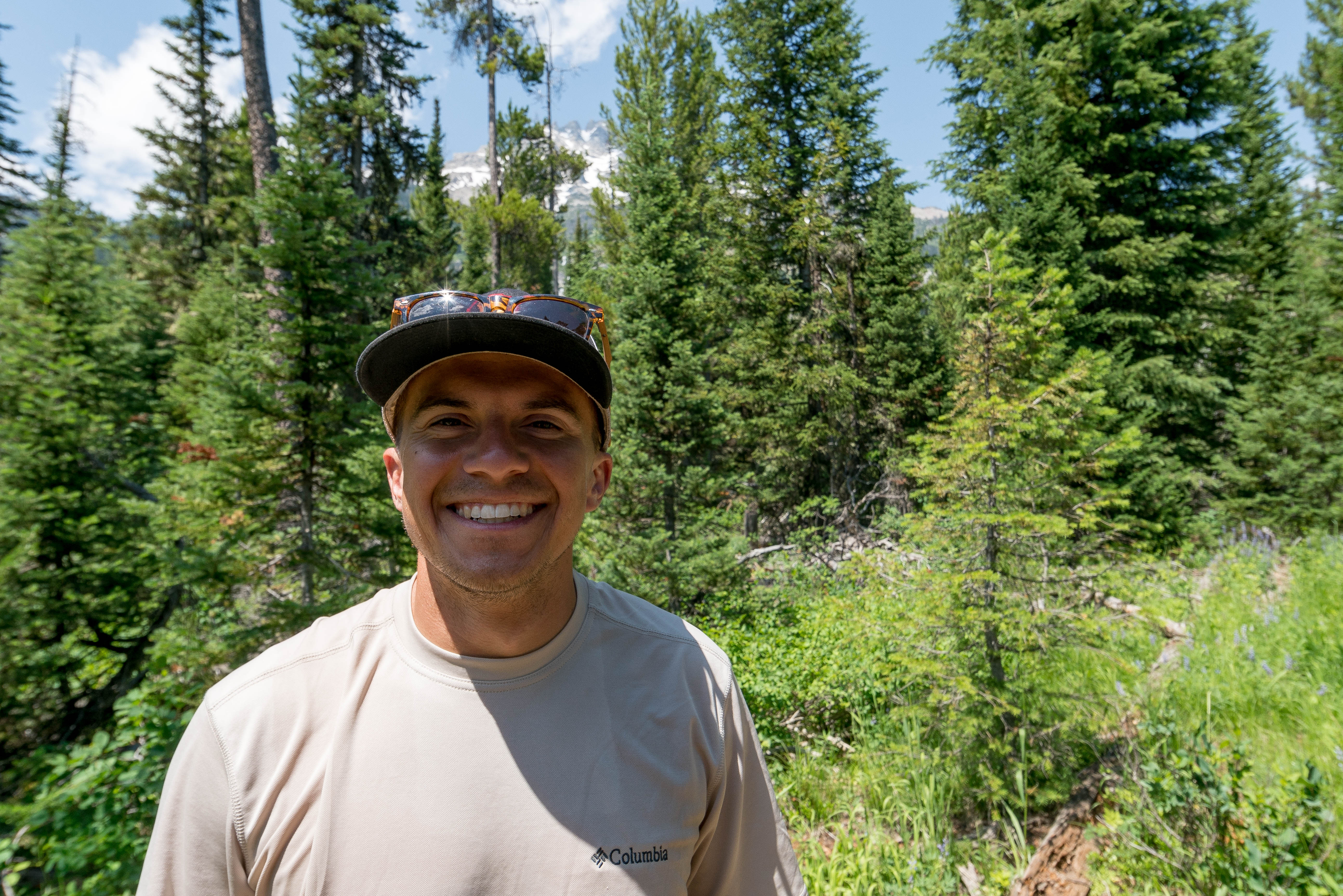 Originally from Maine, Adam now lives in Boston and works as an independent graphic designer. Skiing is by far his favorite outdoor activity. Adam was fortunate enough to spend much time outdoors as a kid and that experience continues to produce dividends. Adam wanted to participate on this climb to pay that experience forward. And challenge himself too! 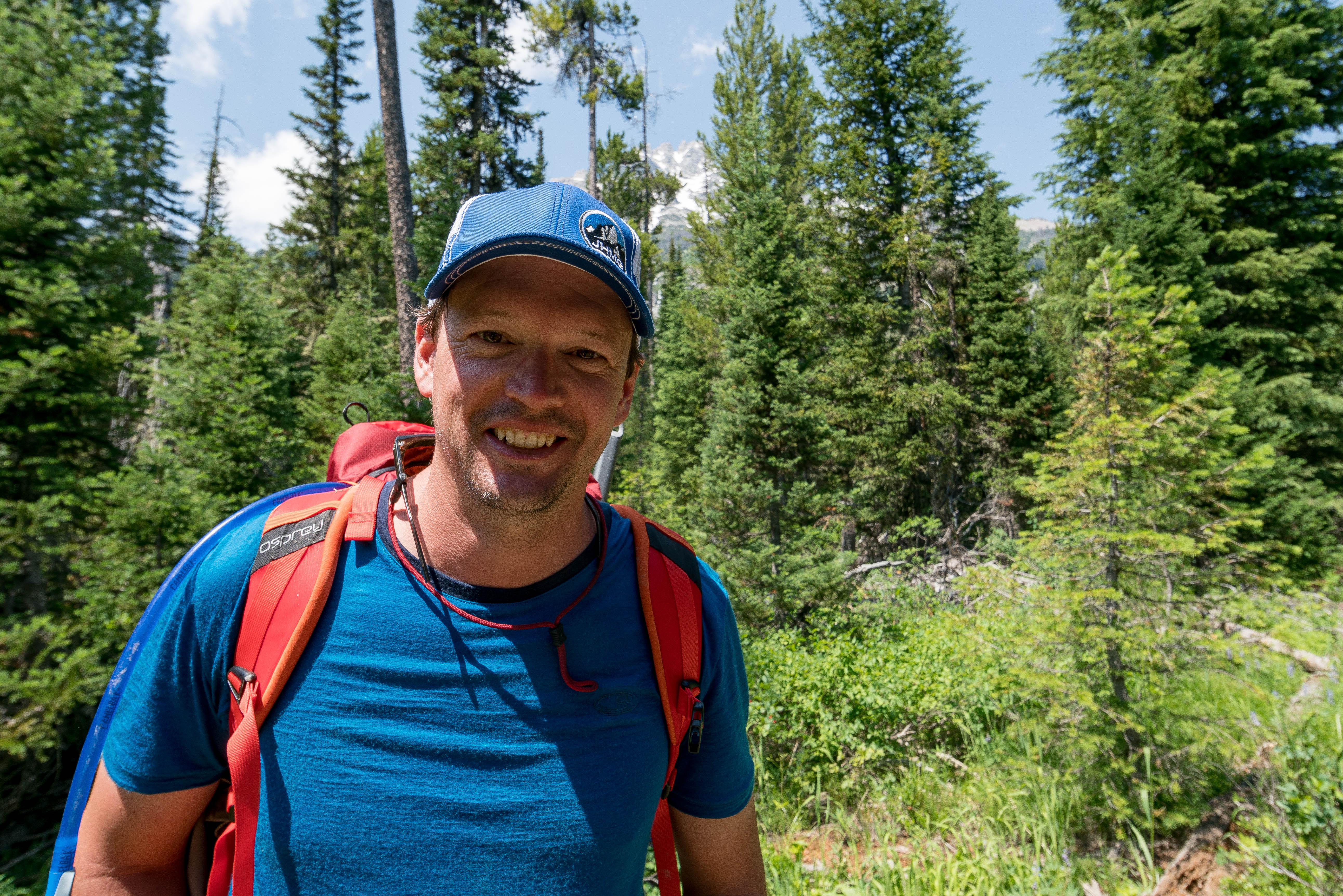 Ken is a software developer in northern New York, and he has an irresistible attraction to big mountains, vertical spaces, and adventure. However, he joined this specific trip because access to outdoor experience has been so critical to his own development and health that he cannot imagine growing up without the experience of the wild world outdoors. BCM is filling a vital role in exposing kids to the environment at a critical and formative time of life. Ken supports that without hesitation. 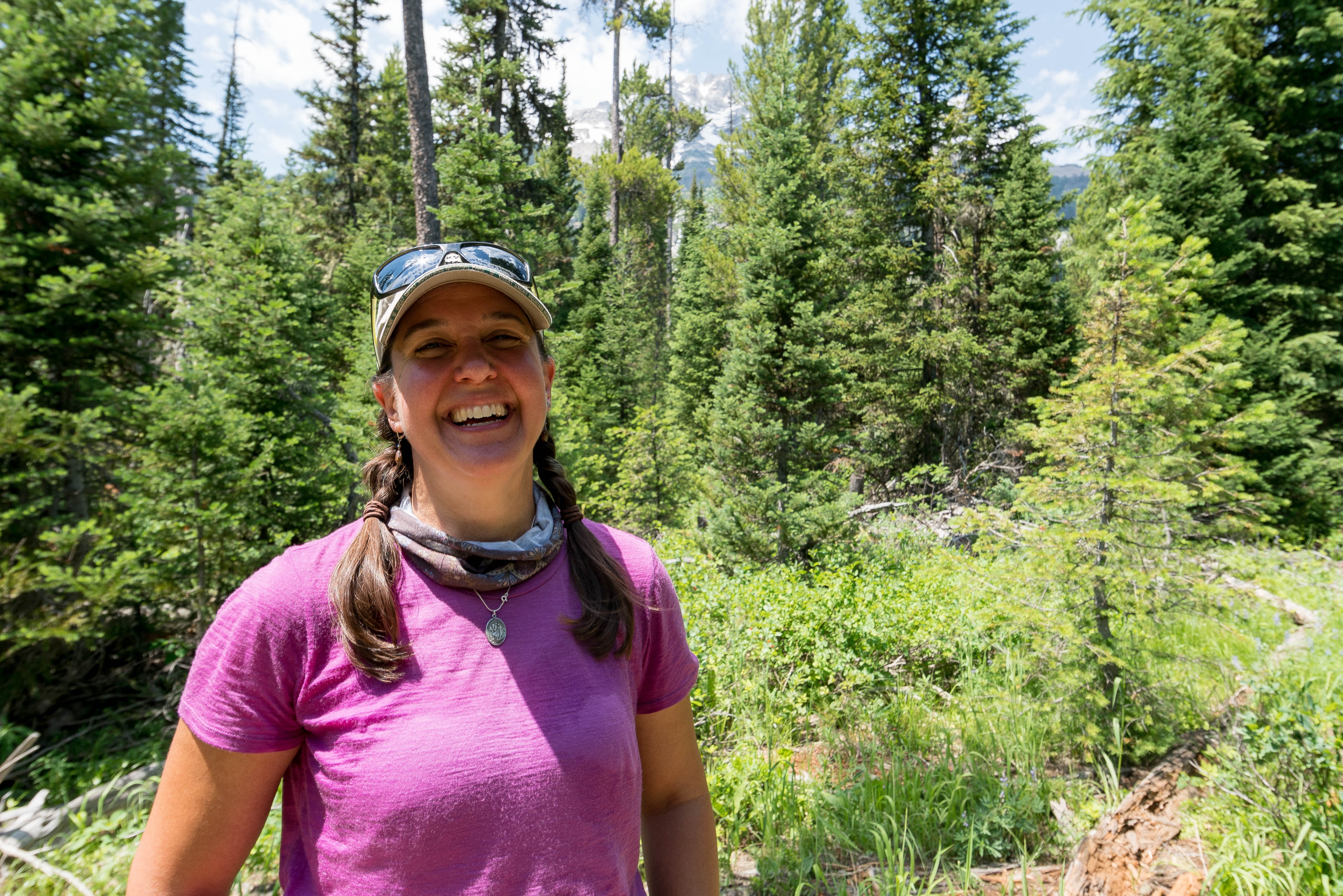 In 1998, Nicole took her first tentative steps on the Appalachian Trail. Almost 20 years later, she took her first steps up The Grand Teton. The years in between were filled with adventures, travels and lots of miles beneath her boots. Realizing how fortunate she was to have lived a life outdoors, she wanted to find a way to give other kids the opportunity to find their own adventures. Check out Nicole's blog for more about her experience on the Grand. 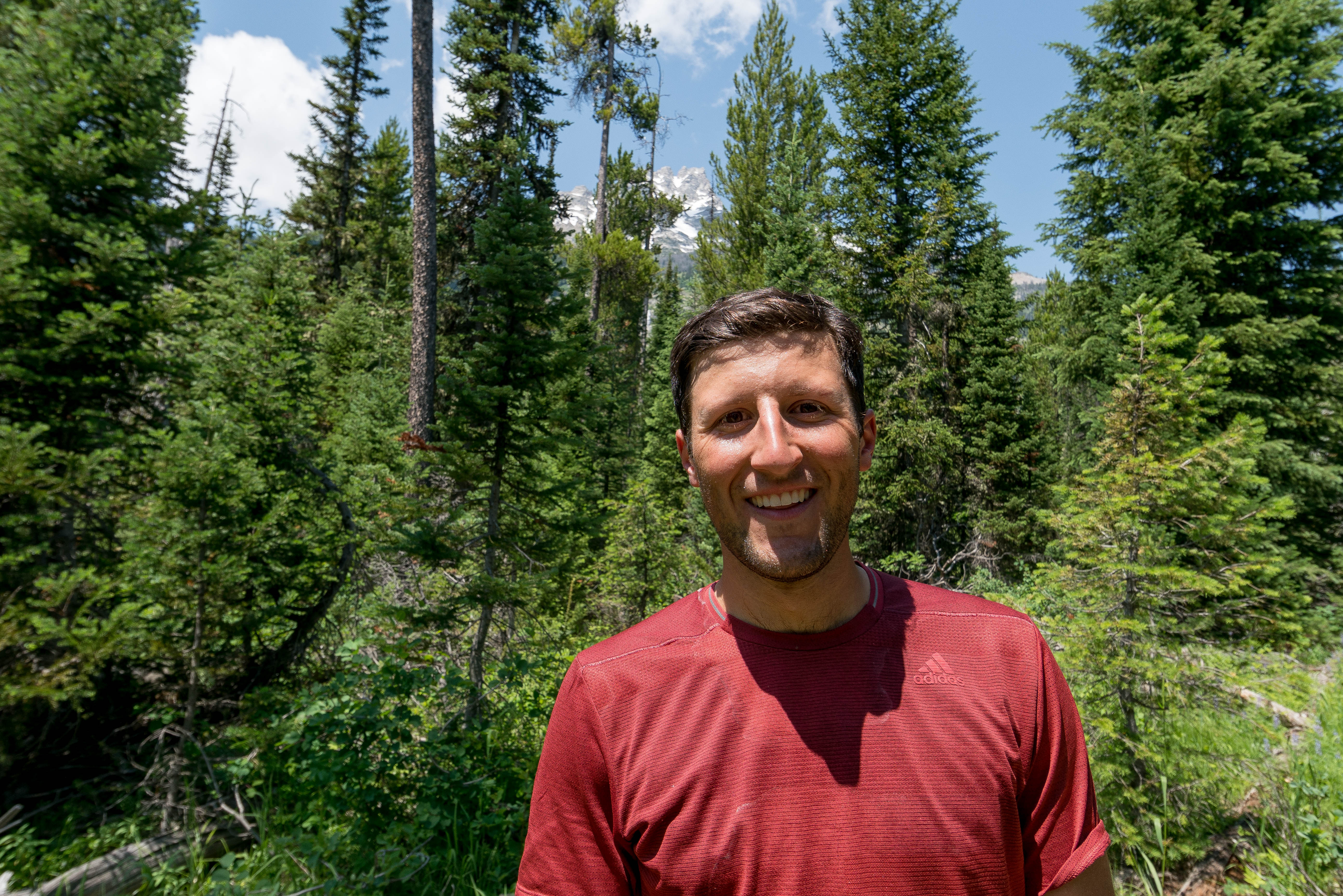 Ben Schenck is the host of MtnMeister, the podcast that explores the minds of those who explore. This is his third Summit for Someone trip, with Mt. Langley in 2015 and Mt. Hood - a Summit attempt for Someone - in 2016. Ben enjoys a variety of outdoors activities, from tennis and golf to cycling, running, and hiking. He is also interested in human behavior and how people make decisions: MtnMeister serves as platform to explore these fascinating fields in the context of extreme sports. 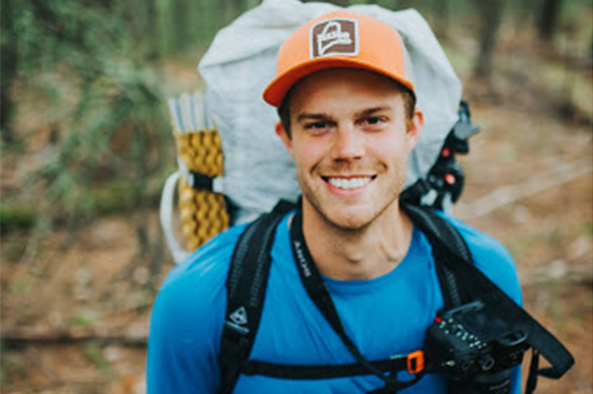 As an adventure photographer and filmmaker from New England, Chris spends the majority of his time in the White Mountains of New Hampshire and across the world. Being in the mountains is when he feels most alive, and it has helped shape his perspective and identify purpose. Chris chose to participate in BCM's Summit for Someone program to help spread awareness of their mission. It's imperative that we as a society continually work to provide access and opportunity for inner city youth to experience what the outdoors can offer them. 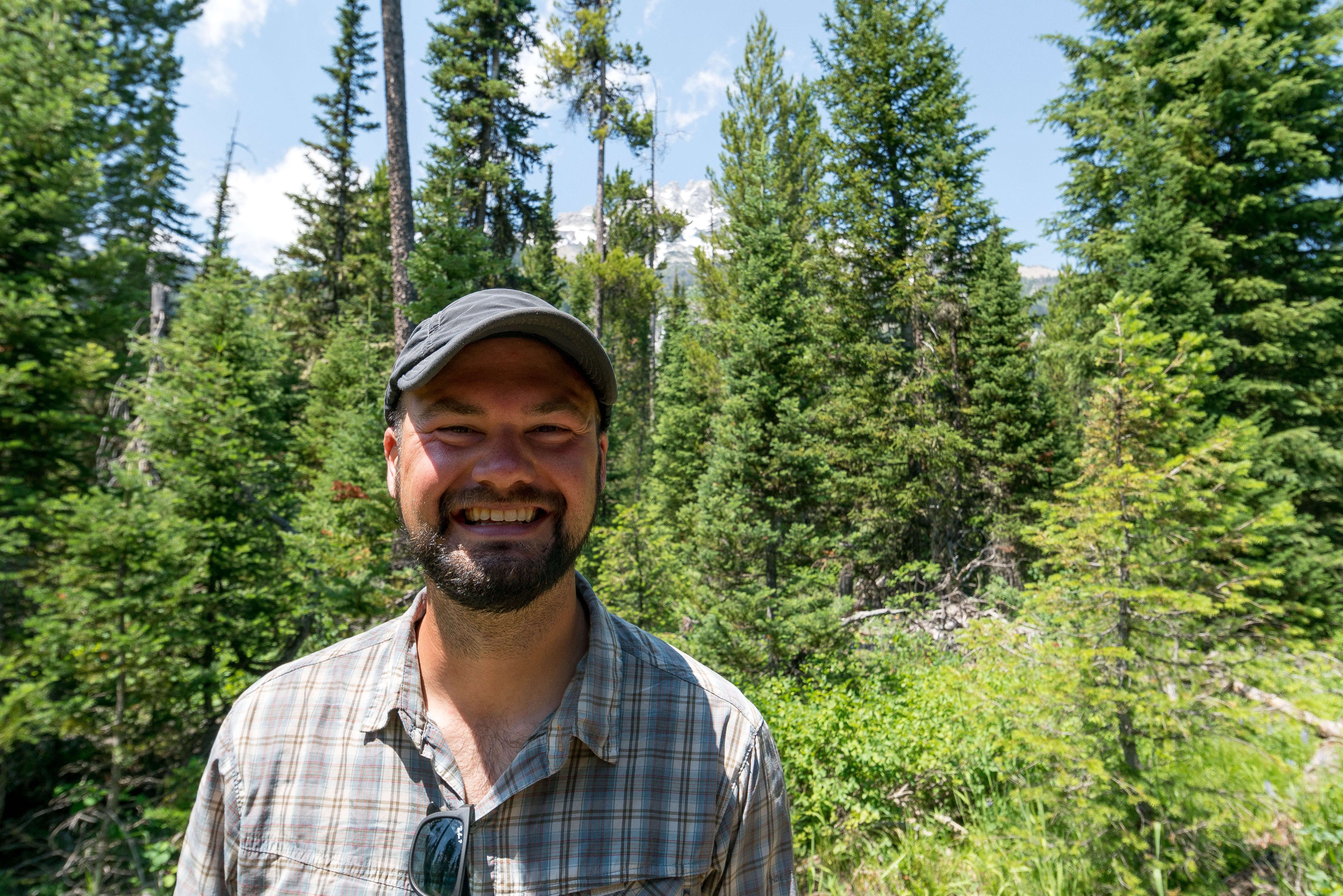 Neal grew up in Oregon exploring the majestic Pacific Northwest. He lives in Portland and works in the natural resource field. Snowboarding and climbing are his two top outdoor activities, but as long as something gets him outside he will give it a try. Growing up, Neal was able to spend a lot of time in the outdoors with his family and with scouting. His experience in the outdoors inspired him to give back and encourage others to get outside by working at outdoor school, summer camps, and with the Portland State Outdoor Program. It also helped to shape the direction of his life, inspiring him to study environmental science and resource management. In wanting to continue to give back and get people outside - as well as making a second attempt on the Grand Teton - he joined this amazing climb! 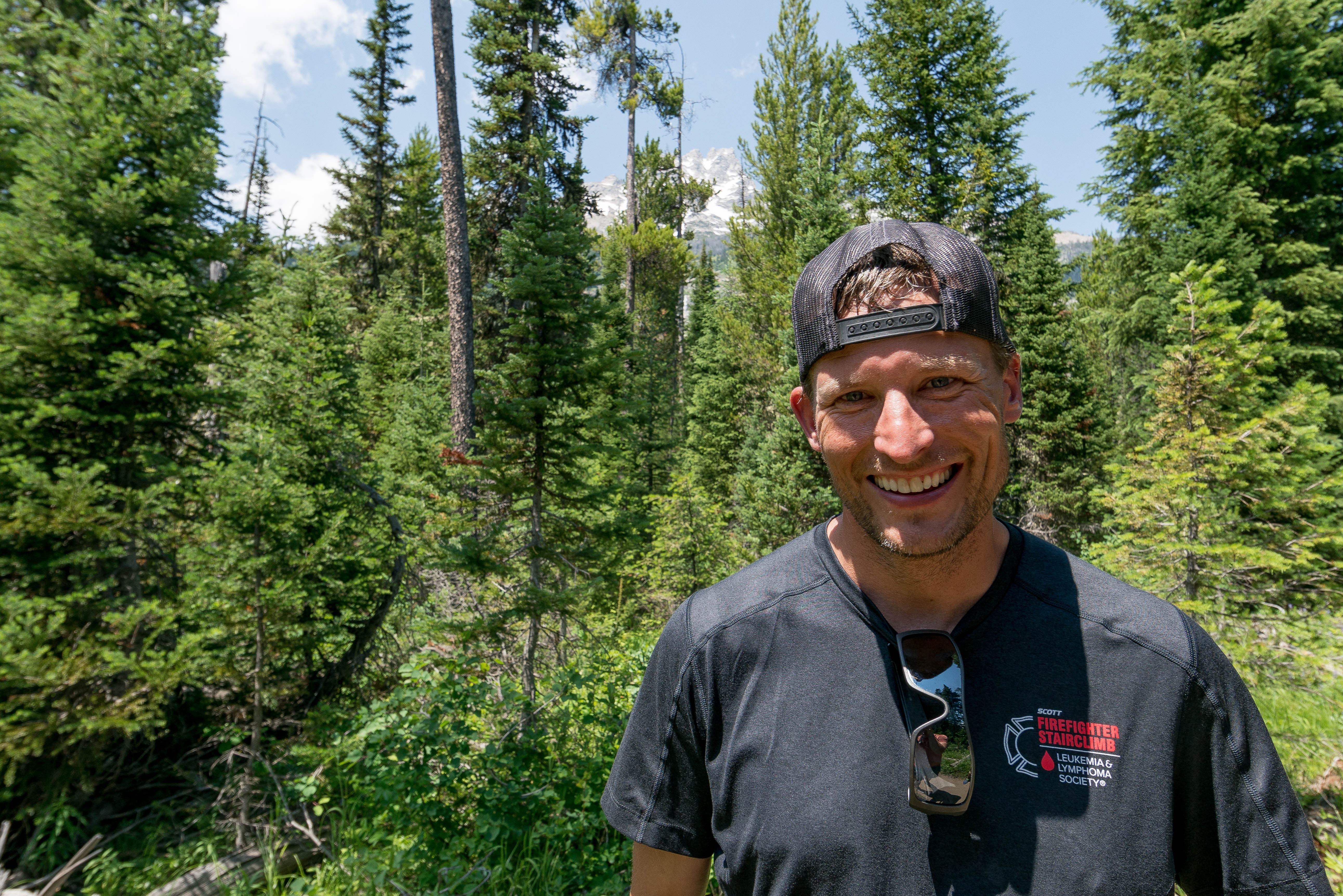 From Seattle, WA, Scott spends most of his time at the firehouse as a fire captain. His engine is one of the busiest in the area. To relieve stress, he loves to get outdoors and hike. He participated in the SFS climb to raise money for the kids. He loves that it helps get them outdoors and experience that fresh air. Scott already signed up for another SFS climb in Mexico for 2018. We had a leisurely morning and started on the Lupine Meadows trailhead at around 9:15am. It was perfectly maintained trail with spectacular views of Teton Valley. On the first day, the plan was to ascend over 4,000 vertical feet from the trailhead at 6,700 to Corbett High Camp at 11,200. It was a long slog but a good time to bond with our fellow climbers and guides.

The diversity in terrain on Day 1 was astounding. We began on a shady trail surrounded by woods which, after about a half hour, turned into sunny switchbacks. A few hours of baking in 85 degrees had us relieved to enter the alpine environment above the trees. As we ascended, snow became more prevalent, and we put on boots and crampons on any high consequence areas. Beyond that, though, we were in running or light hiking shoes the whole time. The end of the first day requires a fairly steep final ascent from the lower snow fields up to Corbett High Camp. We got to the camp at around 3:30pm, making it about a six hour trip. 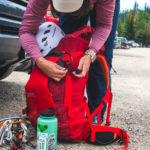 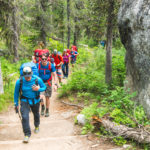 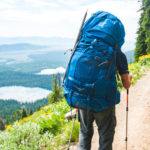 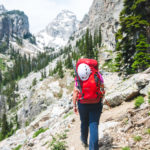 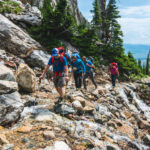 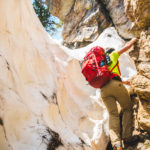 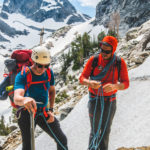 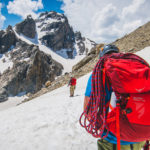 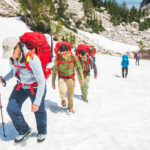 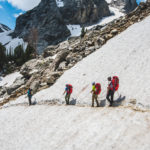 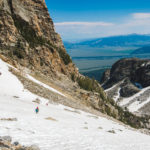 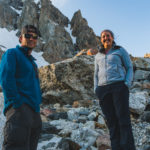 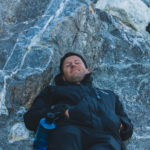 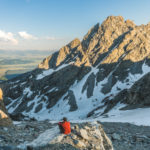 On Day 2, we went to school: climbing school. For the four day Grand Teton trip offered by Jackson Hole Mountain Guides, you do not need any formal climbing experience. You do, however, need to be strong enough to pull yourself up a wall – and gutsy enough to rappel back down.

Jackson Hole Mountain Guides did an amazing job building our confidence on Day 2. It was terrain that many of us had never encountered, yet we’d need to on our summit day. It’s a fine line between showing us our capabilities and pushing us over the edge, and they drew it perfectly. Day 2 began with some simple moves around our campsite and transformed into climbing routes on peaks that we thought were there for decoration.

I woke up at 2am in a tent at 11,000 feet. There had been a storm during the night. Thunder boomed through the mountains and lightning brightened the inside of the tent enough so I could see the startled look on my tent-mate’s face. There had been deep moments of doubt as I lay sleepless, thinking about what lay ahead – the climb to the summit of the Grand Teton. Maybe this storm will prevent us from being able to climb, I thought. Maybe we won’t be able to go and then it’ll be ok to tell friends back home that I didn’t summit the Grand and it wasn’t my fault. But the storm passed, the moon shone bright, and it was time to go.

2AM – All climbers and guides rose from a few short, uneasy hours of rest. The night was dark, but the moon was bright. We ate a small breakfast and warmed up with coffee. At this point, everyone was anxious to just get started. We all double and triple checked our gear, cinched our packs and strapped everything on. A few rallying words from the guides, and we were off and up into the dark boulder field.

4AM – We traversed up the steep snowfield and reached the Upper Saddle. Crampons came off and ice axes went back onto our packs. We continued to move upward, step by step, up the winding path. It seemed as if the crew was quiet in thought, wondering what challenges lay ahead, when it would be time to rope together and into the rock. The sun was starting to slowly rise, our first natural light.

5AM – We had our first crack at the 5.8 Pownall-Gilkey route. Three pitches: a traverse, a crux, and one final pitch to the top. The first pitch, although not highly technical, provides plenty of intimidating exposure. Clinging to the side of the mountain, climbers had a very airy view of the valley, thousands of feet below.

7:30AM – The summit of the Grand, 13,776ft. Cookies, salami sandwiches and plenty of water provided the perfect celebration. Photos, congratulations, calls to mom

Want to participate in your own live-changing adventure in support of Big City Mountaineers? Check the Summit for Someone program here!

Osprey Packs for providing our climbers with the Variant 52L pack.

American Alpine Club for their support of MtnMeister.

Former host of MtnMeister Russell Wilcox. Save up to 50% on solar installation with Do-It-With.

Jackson Hole Mountain Guides for keeping us safe. We highly recommend our guides for your next adventure: 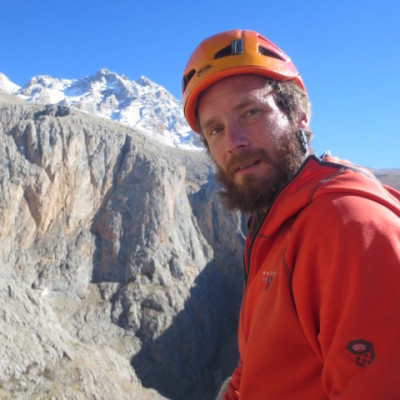 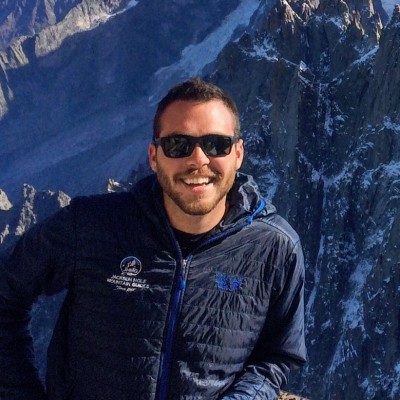 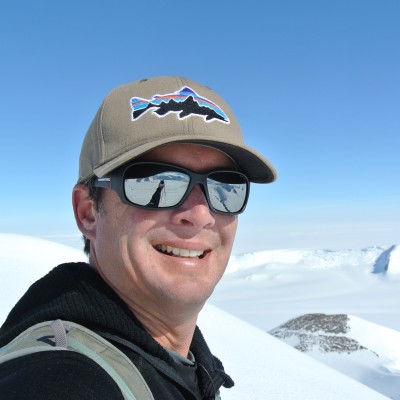